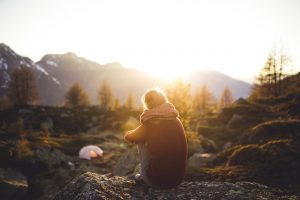 Forest bathing is an emerging therapeutic intervention with 40 years of research behind it, proving our overwhelming need for time outside.

What is Forest Bathing?
Forest bathing is defined as “immersing oneself in nature by mindfully using all five senses.” Also known as Shinrin-Yoku in Japanese, forest bathing surfaced as a prevention and treatment technique in the 80’s when stress-related diseases started sky-rocketing in Japan (ie. hypertension, heart disease, depression & anxiety). The Japanese government became aware of the epidemic and introduced Shinrin-Yoku  as an antidote. There are now countless organizations that offer accredited certification programs in Forest Bathing and even more healthcare programs that implement it as an official medical intervention.

What are the Health Benefits of Forest Bathing?
There’s an overwhelming amount of empirical data that suggests getting as little as 20 minutes a day of forest bathing or direct contact with nature, increases mood, reduces anxiety, pain and blood pressure and, in turn, restores one’s mental and physical health to a significant degree.

But, three days in nature seems to be the magic number for reaping the full restorative effects. Strayer (2016) calls it the  3-day effect – whereby your senses recalibrate after 72 hours and you even start hearing and smelling things in a different way. This is because when we forest bathe, our parasympathetic nervous system (rest & relax state) activates. Allowing yourself to relax on a regular basis physically and mentally, promotes healthy immune functioning and helps speed up recovery, which is especially important during a global pandemic, where managing your day-to-day stress can help prevent further problems.

People living near green space report less mental distress and are more physically active, even when controlling groups for income, education, and employment (all of which are considered social determinants of health). Also, children who grow up exposed to parks are more likely to become environmentalists. 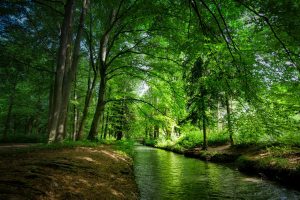 Why does nature make us feel so good ?
There are 3 main psycho-evolutionary underpinnings that explain why forest bathing has such a relaxing effect on humans.

Ulrich proposes that human attention is primarily drawn to anything natural in the environment (ex. sounds of rain, sunlight, sight of a tree, touch of moss) because humans have co-evolved outdoors. It may be intuitive, but according to PET, when we’re immersed in nature, like camping in a forest, our bodies tend to automatically become at ease and we experience positive feelings because we are in our natural element. A study on post-operative care looks at how two groups of hospitalized patients where one group was in a room with a window view and the other group had their beds facing a brick wall. The group with a view outside needed less analgesic and spent less days in the hospital. These results suggest that the natural environment has positive effects on public health, indicating that nature therapy can be used to prevent and treat certain illnesses.

Attention Restoration Theory (ART) suggests that nature helps us focus through something called soft fascination. Attending to “softly” fascinating stimuli (ex. birds, flow of a river, meadow) not only requires little effort but also leaves mental space for reflection. For example, birding is considered to be meditative because of the act of soft fascination – in other words, it’s good for your mental health because of the concentration it requires but not to the point where your executive functioning and drive state (ie. fight or flight state) is activated. We spend much of our days hyper-focused at work or overwhelmed with processing sensory information that we aren’t left with much room to reflect or introspect. Forest bathing gives us the opportunity to be  simultaneously in touch with our senses and mind, without burning out. 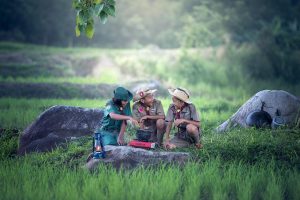 Similar to psycho-evolutionary theory, Biophilia suggests that when our senses are exposed to nature we automatically connect to our primitive roots and process natural sensory information more easily.